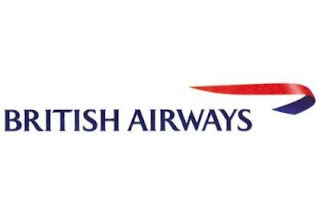 In my Social Media class this past week we discussed crisis communication. My group looked over how British Airways effectively used social media so communicate with their customers.

Since it is very hard and frustrating to get through to anyone on the phone because of the mass amounts of people calling they very graciously added a FAQ specifically for the stranded passengers of the volcano issues. They could find out when and if their flight was going out, how the can rebook, and anything else need to know asap.

British Airways have also been very good in communicating via Twitter to their stranded passengers. BA understands how the publics are trying to get through and they are doing their very best to keep them happy and cheerful throughout this stressful process.

The major thing we noticed was that British Airways was not using the hashtag #ashtag to get through to its customers. The only reason i say this was a mistake was because they weren't reaching a large enough audience as they could have been if they would have used the hashtag.

Overall, we gave British Airways an A-. Very good efforts during this trying time for passengers and airlines alike.
Posted by Michelle at Sunday, April 25, 2010 1 comment:

How Social Media helped the Travelers During the Iceland Volcano 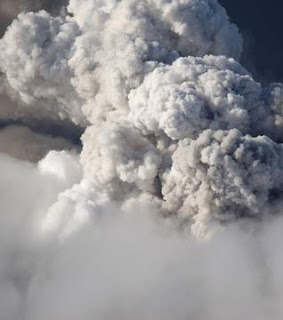 Social Media has its place everywhere. Now more than ever the millions upon millions of passengers have gone the social media route to explain their frustrations, travel hopes, communication with friends, relatives, and even their airline.

Social media has helped people find people to split cabs with them to drive all the way across Europe in hopes to get home. It has helped the stranded and frustrated talk to the airline without having to wait 4 hours or more on hold only to get disconnected in the end.

Twitter has by far been the number one source of social media outreach during this time of crisis. The very popular #ashtag has been more than helpful when communicating with the publics.

Without these social media networks how would this have panned out???
Posted by Michelle at Sunday, April 25, 2010 No comments: 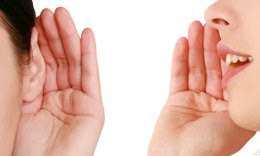 You may all be familiar with the regular word of mouth marketing, for example, when you hear about a good company from someone telling you in person about how great it was.

Mashable put together an Influence Impression Data: 500 Billion Per Year. The results are as follows..

1. Influence impressions: these happen on social media and networking sites: Twitter, Facebook, MySpace (MySpace), LinkedIn (LinkedIn), and others. The people who make them know generally who they’re connecting with and who will read them (people they know).
2. Influence posts: these are more permanent data points in blog posts, ratings and reviews sites, and in discussion forums. These tend to be less directed, in that when putting a post online it’s not usually known how many or who will be reading it.

The research also looked at where those influence impressions are happening. The following graph captures the results of where people are sharing influence online in both of the above categories: 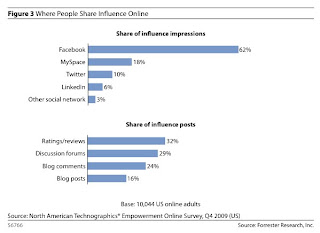 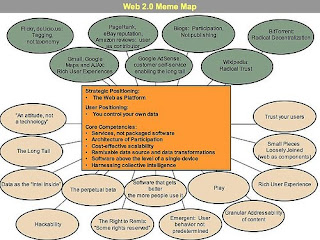 For my Public Relations class we are working on a presentation and chose to do it essentially on Web 2.0. While looking for sources outside my book I came across a very helpful blog on O'Reilly.com. The blog sums up exactly what Web 2.0 really means.

Here they made a quick chart to refrence what Web 1.0 is and how it has come to be known as Web 2.0

The Web has become a platform of new and exciting ways to connect, work, and play. Web 2.0 is now bigger than ever before with blogging, podcasting, YouTube, wikis, Google and more! 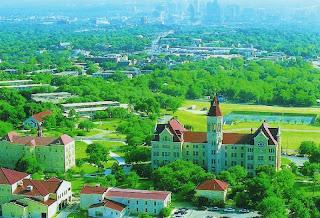 In February St. Edwards University held a President's Meeting to celebrate our schools completion of the 10 year plan!!! Christiana, Julie, and I went and had an amazing time!! For our Social Media for PR class we made a web video and decided to summarize all of our University's accomplishments in the past 10 years....

By 2010 they have accomplished these goals and many more. The enrollment has increased from about 3,700 to nearly 5,300 students. Although the university wanted to increase the population on campus, they also wanted to preserve the personalized education by making sure the student to teacher ratio was appropriate for small classrooms. With the increase of students the faculty was increased with a student/faculty ration of 14:1. My favorite improvement of the school was the globalization of the campus, offering student the opportunity to study abroad. The university has created new partnerships in Mexico, Buenos Aires, Argentina, Edinburgh, Scotland, Seville, Spain, Angers, France, and Koblenz, Germany.
The most beneficial improvement made which is available to all students is the improvement of facilities and technology on campus. With an investment of $147 million dollars in facilities, the University has constructed a new set of dorms and has made a completely wireless campus. They have also added 88 'smart' classrooms, increased the number of public computers from 271 to 729 (WOW!!).
Along with those amazing accomplishments (in just 10 years), St. Edwards has also started to go green! They began a campus wide recycling program and build their new facilities using green principles. The university completed its mission by raising more than $81 million in only 10 years, exceeded annual giving of $1 million, created 79 scholarships.
These improvements to St. Edwards have only enhanced the excellence that was established 125 years ago. I am truly proud to be a student here and am excited to see what the future will bring.

Posted by Michelle at Wednesday, April 07, 2010 No comments: 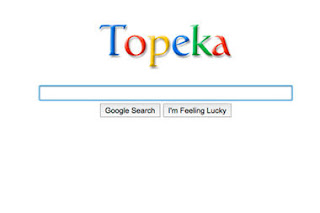 On Thursday, April 1st, I went to my normal search engine, Google, for some information on a new product I was interested in. While typing in my Google search I notices it said 'Topeka' and not Google. I was curious why this was so I clicked a link below that stated "learn about our new name: Topeka". After reading up I was shocked to think that Google would change their name to Topeka because Topeka, Kansas was now Google, Kansas.

I was a victim of a April Fools prank... This was actually the only one I feel for, can you believe it? How could I fall for something like this?? I had to know Google would NEVER change their name to Topeka and have everyone saying "Oh, Topeka it!". Kansas really did change the capitol city name for the month of March but when back to Topeka after the month came to an end.

But for now, it’s April Fools’ Day. “Whatever the outcome, the conclusion is clear: we aren’t in Google anymore,” Google CEO Eric Schmidt wrote on Google’s official blog. 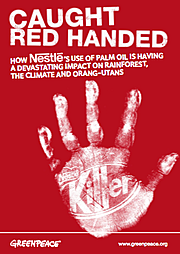 Greenpeace is on the move again and this time targeting Nestle. You might have heard about this from the YOUTUBE video Greenpeace posted about Nestle's use of palm oil in their products, mostly Kit-Kat, and how this is destroying rainforests in Indonesia and killing the Orangutans.

Nestle then demanded that the video be taken off YouTube and YouTube agreed to take it down. Although Nestle argued this they have said they realize a lot more could be done to help the natural habitat in Indonesia. Unfortunately they have yet to respond to the consumers on Facebook, which is bound to be a blow for business and not a ideal PR strategy.

Greenpeace has sent out the Press Release as follows.

The new Greenpeace report, “Caught Red-Handed: How Nestlé Use of Palm Oil is Destroying Rainforests and the Climate” exposes how Nestlé is sourcing palm oil from suppliers, which continue to expand into virgin rainforests and carbon-rich peatlands, including habitat critical for endangered orangutans. Nestlé suppliers include the controversial Sinar Mas group, Indonesia’s largest producer of palm oil.

Nestlé, the world’s leading food and drink company, is a major consumer of palm oil. In the last three years, its annual use has almost doubled, with 320,000 tons of palm oil going into a range of products, including some of its most popular brands. (3)

“Every time you take a bite out of a PowerBar, you may be taking a bite out of Indonesia’s rainforests, which are critical for the orangutan’s survival. Nestlé needs to stop using palm oil from suppliers that are destroying rainforests and polluting the climate,” said Rolf Skar, Greenpeace senior campaigner.

The report launch and actions follows numerous attempts to persuade Nestlé to cancel its contracts with Sinar Mas. Most recently, in December, Greenpeace wrote to Nestlé with evidence that Sinar Mas is breaking Indonesian law and ignoring its commitments as a member the Round Table on Sustainable Palm Oil (RSPO), an industry body that claims to be making the palm oil industry more sustainable. Evidence shows Sinar Mas’s forest and peatland destruction continues unabated. (4)

In the face of its unacceptable environmental practices, several major companies, including Unilever and Kraft, have cancelled their contracts with the group. (5)

“Other big companies are taking action, but Nestlé continues to turn a blind eye to the worst offenders which supply them. It’s time for Nestlé to cancel its Sinar Mas contracts and support a halt to rainforest and peatland destruction,” said Skar.

The expansion of palm oil plantations is a leading cause of deforestation in Indonesia, a country with one of the worst rates of forest destruction on the planet.(6) Due mainly to forest and peatland conversion, Indonesia ranks third behind only China and the U.S. as the world’s largest greenhouse gas polluter.(7)
Posted by Michelle at Sunday, March 28, 2010 No comments: